Armed with valor, Ollie will encounter the devourer of men, the tiger. That’s how he’ll meet Stripes, a good tiger-father and spouse. Or at least that what he says. In reality, Stripes, like all tigers, will demonstrate that he’s no such thing. Quite the opposite, just on hearing the scream “Papa the striped feline will always put his feet to the dust. All throughout the episode, Ollie will meet the three entertaining and quite crazy tigresses, who share the territory with Stripes. And of course we’ll see all about the father-son relationship. How do they all live? Do they fight a lot? Which tigers have the most stripes? And what is their relationship with man? Is it true that tigers fade with time and in water …? And the big question: do they like men as much as they say? Crouched down in the forest, ready to pounce, or bending over in laughter, we promise a half hour of paw swipes, roars and entertainment where we’ll get to know the tiger and appreciate him as he is.
01 Enero 2015 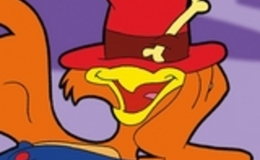