Can you imagine the twins changing a baby’s diapers, feeing him or bathing him? Well now you don’t have to imagine it: Zip and Zap are practicing with Tina, Invi’s little sister, in order to “vaccinate” themselves against the imminent arrival of their own little brother or sister. Yes, there is going to be a third little Zlipper running around the house! Everything starts when Houshoe and Gracie stop paying attention to Zip and Zap and start talking about “someone” who will be arriving after a “nine-month” wait. That is exactly what happened to Invi before his little sister arrived. After that, nothing was ever the same and he became the invisible boy we all know today. But the twins refuse to let the same thing happen to them, even if their new little brother or sister is a real cutie. Will they be able to put a stop to the curse, or will they let the intruder take over their role as kings of the household?
01 Enero 2015 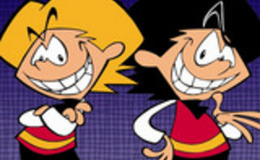