Teo, Paul and Cleta go out for a ride with their mother. Teo and Paul put his safety helmet on and the mother places Cleta at the portable seat of her bicycle. Teo helps her to fasten the safety belt. They are ready. Now they have to start. Teo, very decided, begins to pedal on the pavement and he almost knocks down a pedestrian. His mother stops him. They must use the cycle-path. Once they are in the cycle-path, Teo and Paul learn to respect the directions and the several traffic lights. Cleta claps very funny because she’s having a really good time. They’ve reached the park. They stop their bicycles to eat and ice-cream. But Teo and Paul have left their bikes laying in the middle of the path. An skater is going to crash with it. He must park it well, alongside the others. When they finish their ice-creams, Teo and Paul make a race on bike in a quiet and clear zone, free of dangers. Their mother and Cleta observe them. It’s very exciting and they clap a lot. Teo wins but this is not
01 Enero 2015 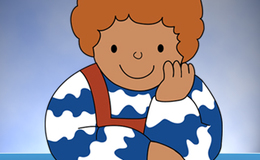