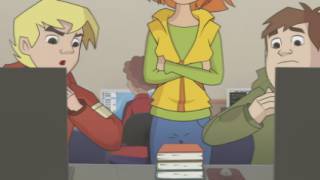 Four and a half friends - The Case of the Lonely Panthers (cap.15)

Handsome Harry is acting weird. He's dressed like a biker, is driving a Harley motorcycle ¿ which doesn't suit him at all ¿ and appears with beautiful 20-year-old Laura who met on a social network dating site. Charly is suspicious ¿ she's too nice for Handsome Harry ¿ and Stefy becomes jealous. Nicole reveals Laura is a bicker chick and works as a waitress in Lonely Panthers' Club. When someone steals Handsome Harry's motorbike, Charly & Co investigate her at the Club.

Four and a half friends