LISA is very worried about DAVID and SWIFT, as they were supposed to have arrived already. She is trying to explain to us some of the furniture they use in gnome houses, but is incapable due to her state. DAVID, on his way back home, has been capture by the TROLLS: HOOLEY, POT, PAT and POOPEY. LISA goes out searching for them and discovers where they are. Dressed as a sorcerer, she cooks a special brew outside their cave putting some opium into them so they fall asleep. She rescues DAVID and SWIFT.
01 Enero 2015 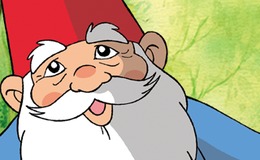